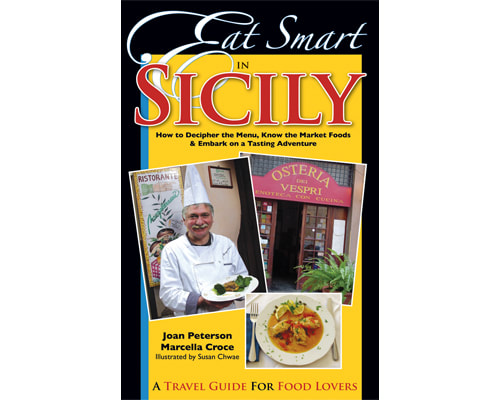 Winner of the National Best Books 2008 Awards for Travel Guides, sponsored by USABookNews.com. Finalist for the 2009 Next Generation Indie Book Award in theTravel/Travel Guide category. First Runner up for the Eric Hoffer Book Award in the Reference - Travel category. Best Food Guidebook of the Year 2008 from Planeta.com.

Rich with seafood, citrus, olives, and almond sweets, the cuisine of the sun-drenched island of Sicily reflects the influence of Greeks, Norman French, Tunisians, and Italians, among others. Unlike guidebooks that sweep Sicily into an overview of Italy, this latest addition to the award-winning Eat Smart series focuses solely on the cuisine of Sicily. Eat Smart in Sicily provides an historical overview of the peoples who have lived there and their contributions to Sicilian cuisine, with attention given to the fare distinct to the villages and urban centers of Sicily’s four regions. A helpful guide to Sicilian menus, with English translations of Italian (or Sicilian) words, makes ordering food in Sicily an easy and immediately rewarding experience. Highlighting regional recipe mainstays, Joan Peterson and Marcella Croce provide tips to shopping for traditional ingredients in Sicily and at home. The book also includes a comprehensive glossary of foods, kitchen utensils, and cooking methods to prepare authentic Sicilian specialties at home or abroad.

"Eat Smart in Sicily by Joan Peterson and Marcella Croce (Ginkgo Press, 2008) [is] the best portable guidebook to Sicilian food, with a summary of Sicilian culinary history and a very good menu translator. You'll definitely want to take this little book with you when you travel to Sicily."
—Sharon Hudgins, food editor of European Traveler, http://www.europeantraveler.net.